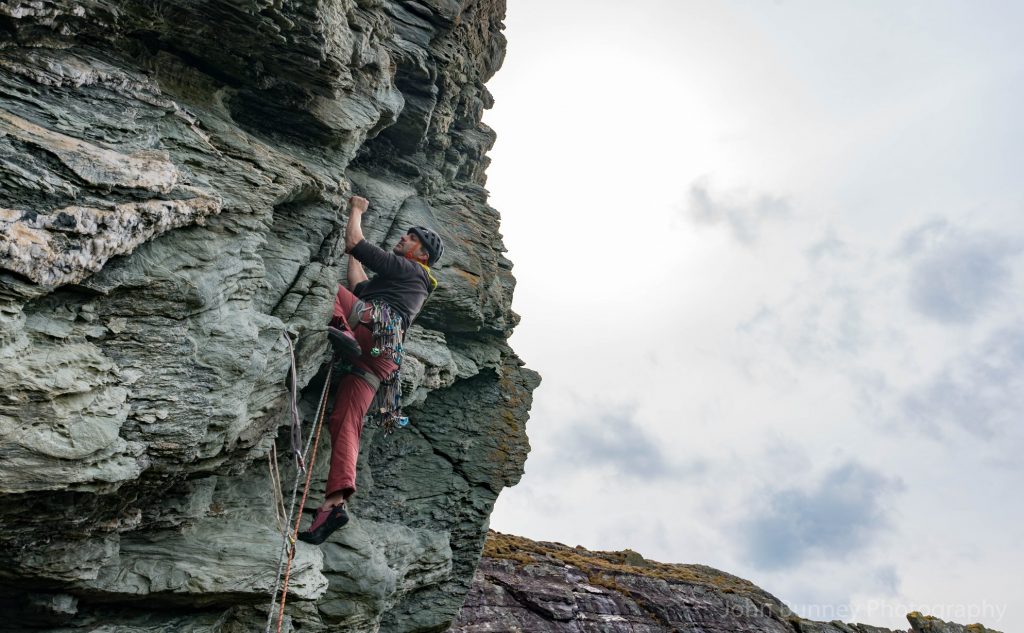 So generally this easter weekend has been a total wash out. With little in the way of climbing to be had due to the damp rock. That said I did manage to squeeze in 5 routes on the Range on Sunday with a good friend John Bunney. With route between Severe and E1 we managed to tick four different crags and some really good routes.

First was Delicatelesson, HVS which is a really nice slab into a loose and scary top out, although on a drier day its neighbour RAF Brown Slab, looks really good rock up a similar slab to the top. We then headed over to Quartz Zawn and climb a severe up to the bird beak. After that is was over to the headland and another fine climb up coarse layers of rock and cracks, on a route called Just Brew It, a stunning VS, just remember if you abseil in from the stake along the cliff edge then run one half of the rope towards the top of the route to help make something resembling a belay.

Finally after the tide dropped we headed to D-Day buttress and Bunney climbed Gold a fantastic severe that cuts its way along a slender gangway between steep rock. After that I did the route straight through it Atlantic Wall a fantastic E1. Which is something of an eliminate, but a reasonable good one for such a crag.

It was really good to start repeating a few routes I hadn’t previous done on the range. As it is a overlooked area and full of mini adventures.

An etching of The Lone Tree of Llyn Padarn long be

@lewis_perrin_williams mate on some 7a slab near t

Out with Hosey around clegir easy bouldering. Chec

@caffinspain core shot rope after we pulled it on

#DrakefordCanKissOurArses! I think after the lates

So incredibly lucky for a beautiful day out on the mountain with Mark. He was wonderfully accommodating and went above and beyond to ensure that I had the best day climbing possible. We were able to do a couple of classic routes and he was constantly sharing his local knowledge and climbing expertise. His familiarity with nearly every person we passed on the mountain showed his remarkable depth of commitment to the climbing community in Wales. I couldn't have asked for a better guide.