A steep and intimidating crag, with main ly classic hard routes, although there are a couple of fine E2’s for mere moretals.

Scimitar Ridge is main the home to hard routes like the classic E4 and E5s. In particular Roc-Nest Monster at E4 and Killerkranky and the Trufty Club Rebelion at E5. Beyond this the routes remain classsic and none more so than the tick of the crag which is King Wad perhaps the most sorted after E6 in Llanberos Pass after Lord of the FLies on Dinas Cromlech.

As such this crag does not attract too many climbers, however hidden on the cliff are a couple of fine E2s, Troy and Cheron which despite their proximity to each other offer very doifferent challenges.

The crag catches the early morning sun so is good on hot summers afternoons if you need the shade. 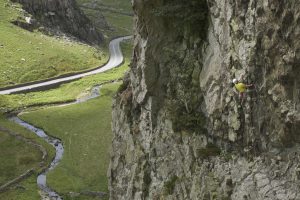 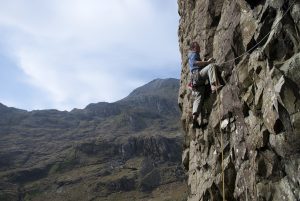 Simon Lake traversing out across the start of Troy, E2, Scimitar Ridge 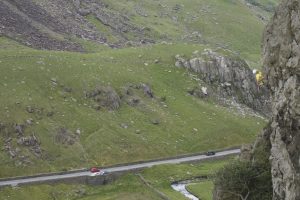 A climber eyeballing the final crux moves of King Wad.