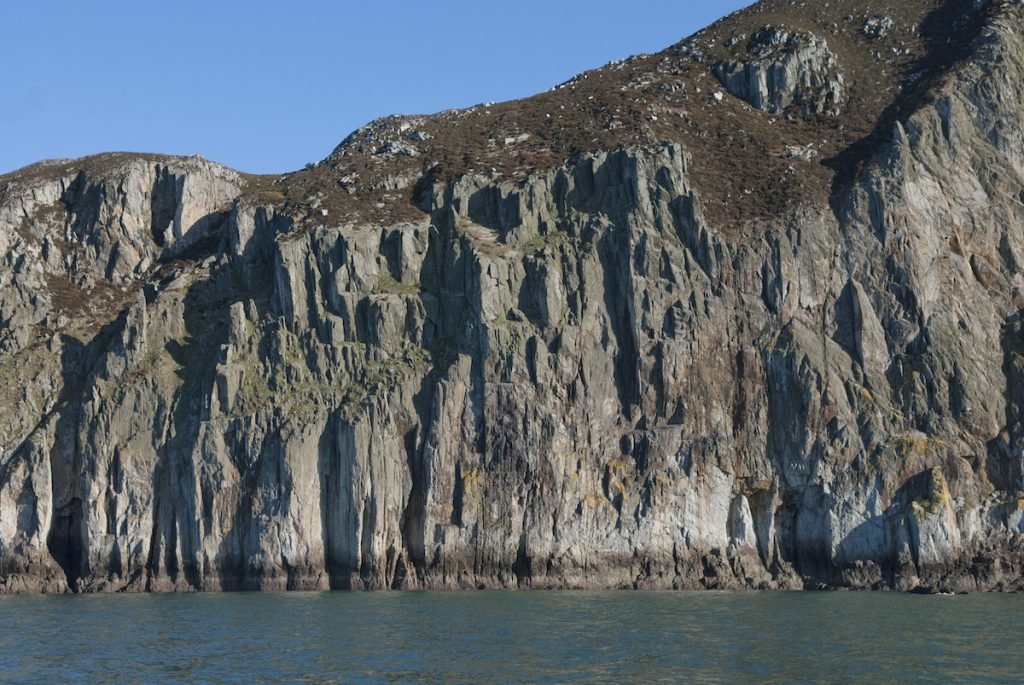 As such there are many areas of the Main Cliff or Gogarth Bay. Each has its own character and feel. Often defined by the complexities of the approach. With nearly all areas requiring a abseil approach or some form of exposed scramble to the base.

The North Stack wall is home to many classic runout chop routes. The best of which is arguably The Cad E5 or its direct version The Bells, The Bells E7. Despite this, there are a couple of routes for lesser climbers like South Sea Bubble E3 and Blue Peter E4.

This zawn is very isolated and despite not being very big packs a big punch. The route that gives the name to the area is the one that nearly everyone comes here to climb. As such Flytrap E2 is a classic and sees you take a meandering line up and down and into the belly of the zawn before escaping up through a blowhole.

This area is one of the finest Zawn in the UK. Home to many classic routes it is best known for Dream of White Horses. A classic rising traverse of Wen Slab. This is perhaps one of the most sort after routes on the UK at the HVS grade. It is also one we both offer private guiding and coaching on.

As well as this there is Britomartis HVS, Spider Wall E1, Wen HVS, Quartz Icilcie E2 and T-Rex E3. All of which are *** classics.

This is a remote and hidden area with a difficult access. As such it is often a more esoteric area visited only by Gogarth regulars looking for a real adventure. With a host of really good rotues from HVS to E3 this again is a great area.

A large swathe of rock that extends from Easter Island Gully. It has two approaches the Far End is best approached via a 100m abseil, whereas the Upper Tier end requires a long and arduous scramble to the base. There are so many good routes here to narrow it down is hard. However there is a good selection of routes from HVS to E3 that scatter the cliff.

The main importance of this cliff though is a section of around 20 routes all of which are E4 and above. Nearly every route get stars and many are outstanding examples of the grades.

The upper tier is home to several great routes. Cordon Bleau, a high level VS  girdle of Main Cliff starts here. As does Bezel another great VS. There are a few excellent HVSs including The Gauntlet, The Ramp and Parklane/Doomsville. The stunning crack of The Strand a stunning E2 and of course the pumpy diagonal crack of Strike E4 to name just a few of the popular routes on this buttress. 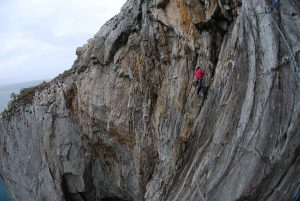 Cheymoon crusing across the final pitch of A Dream of White Horses, Wen Zawn, Gogarth, one of the most famous HVS climbs in the world. 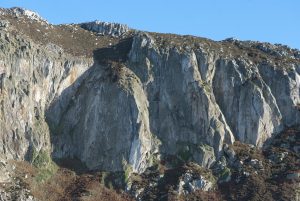 The Upper Tier of Gogarth, with the stand out crackline of The Strand, E2 clearly seen ‘standing out’ from the rest of the lichen covered rock on the left of the shot. 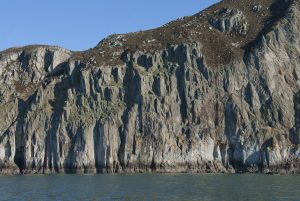 The mighty Main Cliff at Gogarth. Home to some of the finest sea cliff climbing in the UK. 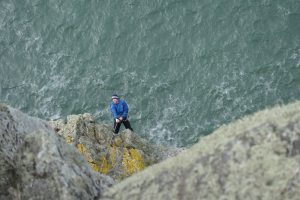 Alex Mason abseiling into Main Cliff to explore the possibilities of a new route. 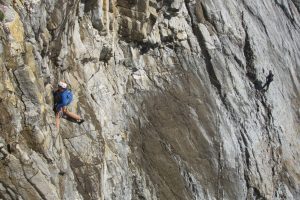 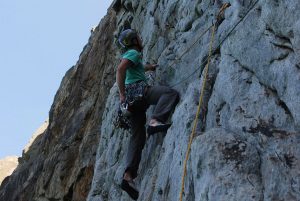 Simpn Lake charging up a classic E5 on main cliff, Gogarth. Positron is perhaps one of the finest routes of the grade there, and there are many! 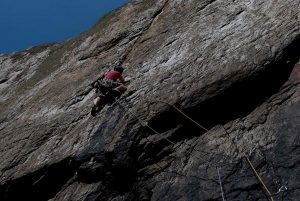 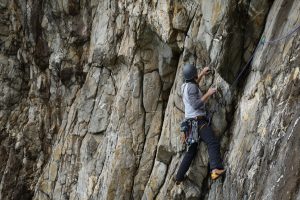 Adam Riches cruising the crux of the third pitch of Dream of White Horses. Possibly the best route in the world! 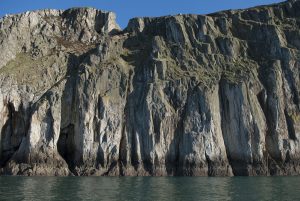 The remote Easter Island Gully area of Main Cliff Gogarth. This is a great area and often devoid of other climbers. 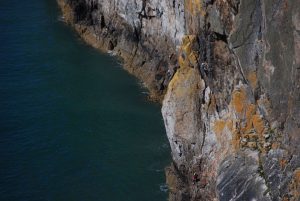 A climber (in Blue) tackles the classic Resolution Direct on Gogarth Main Cliff a classic E2. 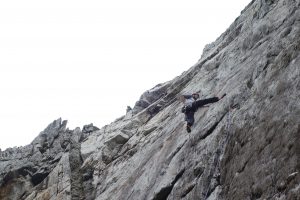 Adam Riches on the Classic Dream of White Horses. Adam came for a sport to trad conversion and this was his fifth day of trad climbing!!! 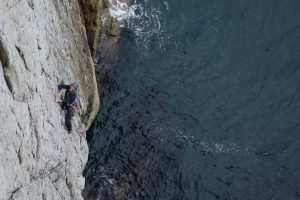 Adam following the Britomartis Wall route Bluebottle, a wild traverse of the wall finishing up a steep and challenging groove. 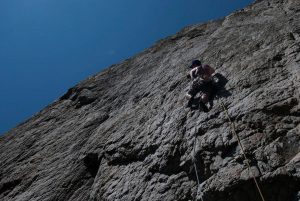 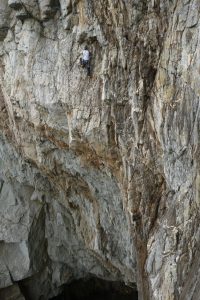 Adam showing us he has mastered trad climbing after a five day sort to trad conversion course, as he styles his way across the final pitch of A Dream of White Horses, Wen Zawn, Gogarth. We also offer guiding and coaching across this route. 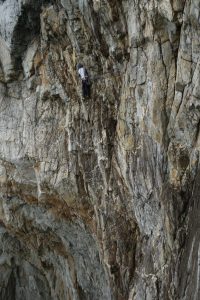 Adam Riches on the imposing final pitch of Dream of White Horses, with its wild exposure it really is one of the best pitches of HVS climbing anywhere. 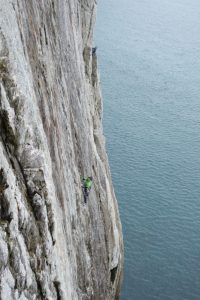 An unknown climber on Dream of White Horses – high start from the notch. 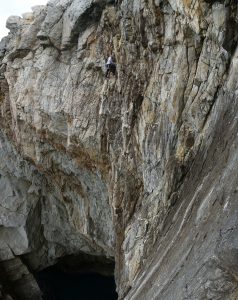 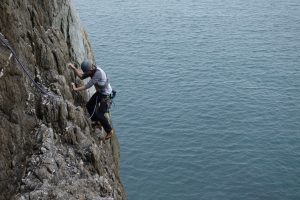 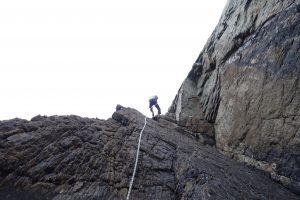